Ain't that a Kick in the Head?

Summary: In this post, I describe how I setup the latest digiKam release on my Kubuntu 18.04 system with remote storage and database using an existing cifs/samba network share, MariaDB, and a custom color correction profile (.icc).

digiKam is a popular open-source photo management system which provides the ability to organize and manage photos, edit metadata, and perform light editing. It can easily handle bulk image organization and RAW image processing. The software was originally developed using the Qt toolset for KDE Linux, but current versions are also available for Mac and Windows systems.

digiKam uses a database to manage its images and metadata. For use on a single computer, the 'out of the box' database is SQLite. SQLite is a self contained database system that is automatically bundled and installed with digiKam. However, if you intend to use digiKam from multiple computers, you will need to use a database server such as MariaDB, a popular database server based on mySQL.

Installing MariaDB is relatively straight foward and there are many good articles explaining how to install MariaDB on a server. For purposes of this post, I will assume that you already have a MariaDB (or mySQL) server available and you can be log in as root.

Setting up MariaDB for digiKam

Although it is possible to use a local "internal" version of mySQL that only runs when digiKam runs, I will use the external "remote" option so that I can access the same data from both my laptop and desktop computers using MariaDB.

To prepare MariaDB for digiKam, perform the following steps to create a database and user:

If you are interested in more detail, the digiKam configuration documentation is quite well written and worth a read.

With the database and user created, we'll shift focus to setting up the cifs/samba network share for use with digiKam.

Since I am going to be accessing the photos from multiple computers, I have located my photo files on a Synology NAS. digiKam is able to access image files on remote systems via cifs/samba and nfs. As some of my computers are Windows boxes, I have elected to use cifs/samba. (For information on how to configure a Synology NAS to share folders via cifs, see Create a Shared Folder.)

To mount the shared folder housing my photos on the NAS, I've edited my fstab file to automatically mount the folder for me. As fstab is readable by everyone on my system, I don't want to store my cifs/samba credentials in the fstab line. Therefore, I first created a credientials file, and then pointed my fstab entry to it. Here are the steps to setup the credentials file and then edit fstab (under ubuntu 18.04):

Assuming there are no errors, re-boot to confirm update is persistant. After re-booting, the share should mount automatically when first accessed.

With our database created and our image files mounted, we are now ready to install digiKam and configure it.

There are a couple of ways to install digiKam on Linux. Many linux distributions maintain digiKam packages in their distributions. However, digiKam is updated frequently and these distribution copies tend to lag behind quite a bit. For example, the version available in kubuntu 18.04 is currently 4.5.6, where as the current release version is 6.0.0.

As an alternative to your distribution's packaged version, digiKam is available from the developers as an AppImage. Essentially, you download the AppImage, set it to be executable, and then run it.

Set up a directory for the AppImage

AppImage files can be located pretty much anywhere on your filesystem (assuming the correct permissions have been set). Personally, I store AppImages in an 'opt' directory under my user account's home directory. The following terminal commands can be used to create an opt/digiKam directory and then switch into it (omit the first step if you already have an opt directory):

To download the latest digiKam AppImage, visit the Downloads Page and follow either the 64-bits or 32-bits link under "Linux AppImage". If your computer was built in the past 10 years or so, you're probably better off with 64-bits, but if you are using a (very) old computer or know that you are using the 32bit version of your operating system, choose the 32-bits option.

Assuming your brower downloads to your ~/Downloads folder, the following command can be used to move the digiKam AppImage file to your newly created ~/opt/digiKam directory:

(Note that you may need to update the file name if you have downloaded a newer version.)

Once you've got the AppImage file located, change the permissions on it so that you can execute it:

You can then execute it by entering:

The first time you run digiKam, it will start with an 'assistant' tool that will allow you to configure initial settings. This will include specifying the path to your photos, configuring the database, and setting a series of additional options (all of which can be changed later if needed). 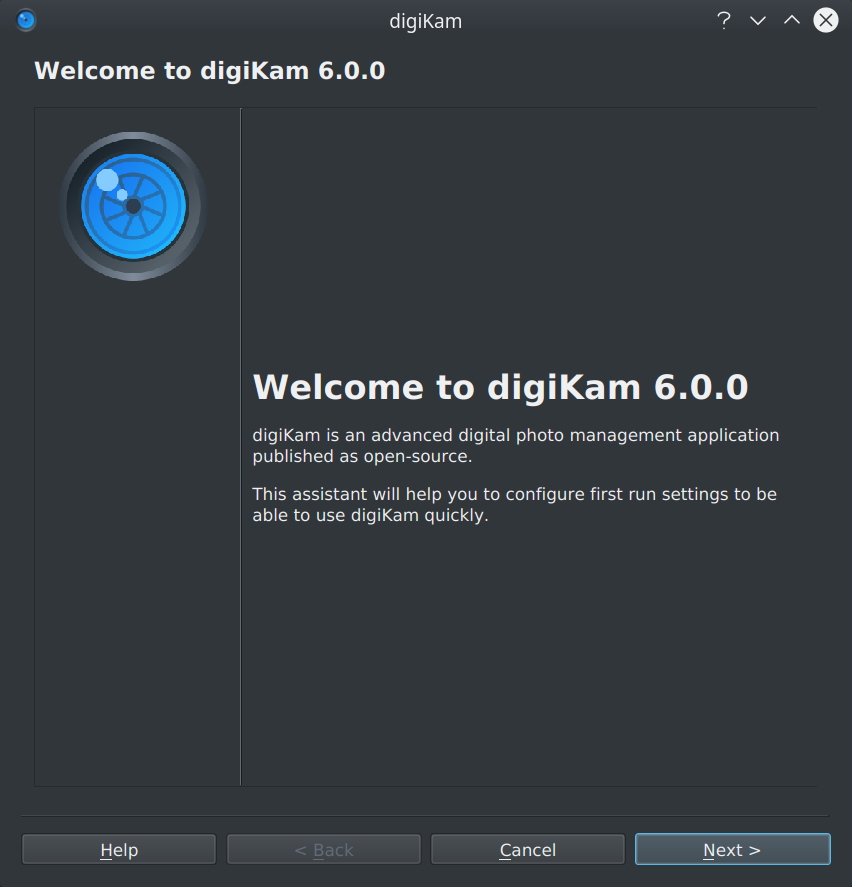 Configure where photos are stored

From the "Configure where you keep your images", specify the path to your photos. By default, this will be the Pictures directory of your home directory. I will replace this with the path to the mounted network share (/mnt/filmrolls): 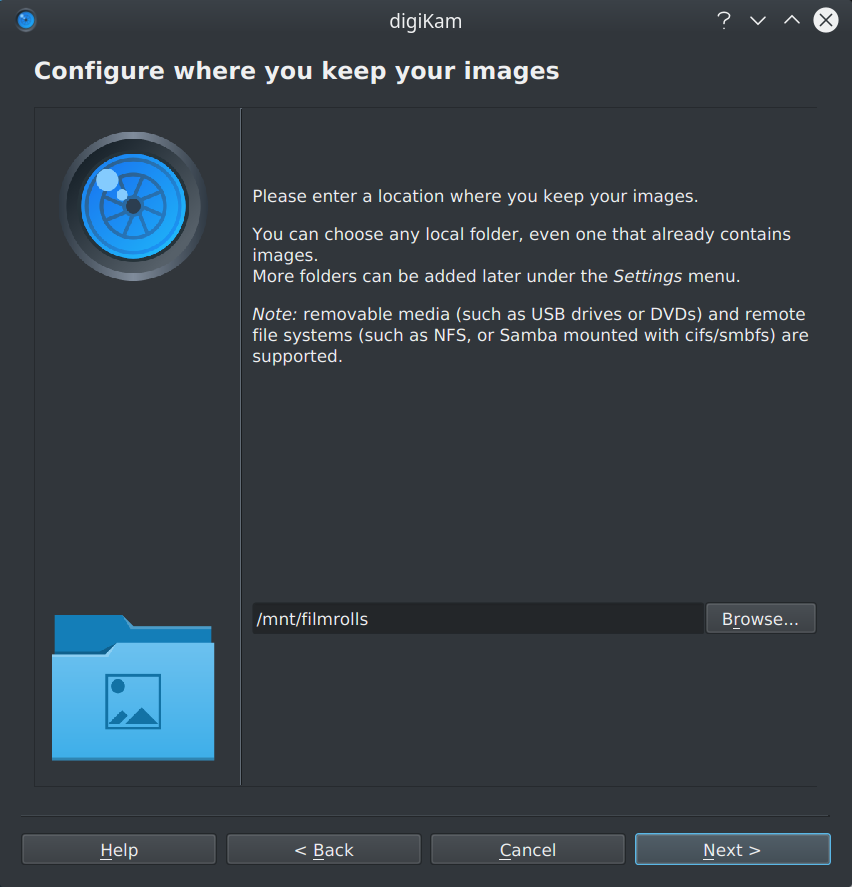 Once you've got your path specified, click Next > to move on to database configuration.

Configure digiKam to use your MariaDB database

From the "Confgure where you will store databases" dialog box, select MySQL Server (experimental) and then enter your server settings on the Remote Server Settings tab.

Click on Check Connection to confirm the settings you've entered and make any corrections needed. Finally, click Next > to continue with the setup.

The digiKam setup assistant will continue to take you through various initial options including how you want to handle RAW files, if you want to embed metadata in files (or just the database), tool tip configuration and a bunch of other options. Read the dialog box comments and make your choice (I mostly just accepted the defaults and clicked Next > alot).

Finally, you'll come to the end and digiKam will inform you that you've made it through the "minimal setup" and will start scanning your images to identify new albums (by which it means the sub-directories that you may have previously organized your photos in). 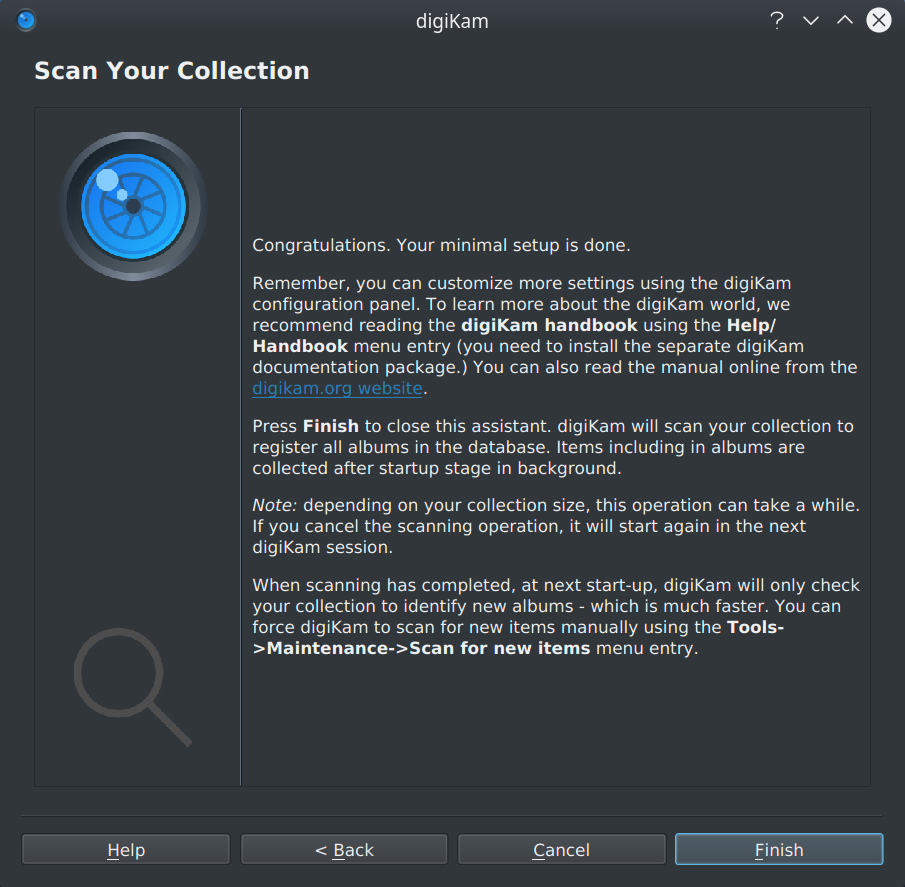 Click Finish to close the setup assistant and commence scanning.

With our initial setup complete (and images scanned) we can now specify a custom profile. To do so, follow these steps:

Setup a Launcher Icon for digiKam

One small downside of the AppImage is that is does not setup an Application Launcher. To setup a Launcher on KDE systems, perform the following steps:

You should now have a "digiKam" Application Launcher on your KMenu. KRunner will now also list digiKam as an application if you prefer this method of launching applications.

That's it. If you've followed along, you will have a digiKam installation on your system using a remotely stored photos, a MariaDB as your database backend, and a color corrected display.